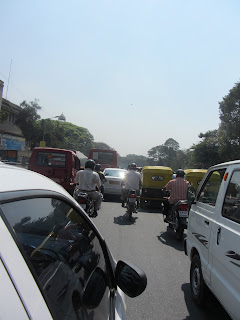 From another interesting article on how the degree of traffic regulation may affect how people drive :
"It may sound like chaos, but it's only the lesson drawn from one of the insights of traffic psychology: Drivers will force the accelerator down ruthlessly only in situations where everything has been fully regulated. Where the situation is unclear, they're forced to drive more carefully and cautiously." It seems that in many contexts, when you require people to communicate with each other to establish the certainties of the current situation and how they should proceed, rather than relying on rules and process, everything flows more smoothly. Who'd have thunk it? I

I completely agree -- when we have too many rules we stay in our bubble and don't pay attention to what is going on around us. We don't expect or welcome any deviation of these rules and this can cause more fender benders in driving and mistakes, bugs, or even less creativity in SW.

A long time ago, when I moved back from US, I wrote this post comparing driving in India and how I was building software. Driving on Indian Roads reminds me of Software Development

Dave,
I agree. Speed (and hence productivity) increases when you provide the right infrastructure to teams and have them put together some rules (or policies). Community agreements help in all conditions.
Very good observation and a positive take on your trip to India. I was a memorable experience meeting you in the conference
.