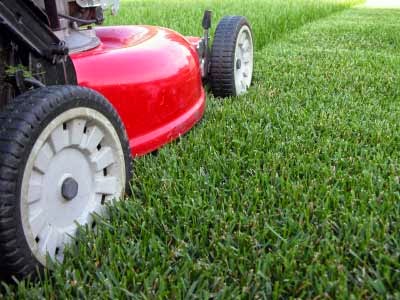 I was cutting the grass this afternoon and remembered back to when I was a kid. My parents had a relatively large lot, and it used to take me a good two hours to cut the lawn. The problem was, I hated cutting the lawn. Even when I was a teenager, I couldn't understand why we want to "maintain" our lawns, making them look as artificial as possible without resorting to Astroturf.

I would do whatever was possible to get out of cutting the lawn. I still do, for that matter! Raining in Sudbury? Well, it could make it to Ottawa at any time... that would be unsafe! Inevitably, though, I had to cut it.

Even then, I wasn't going to go out of my way to extend my agony any more than was necessary. The back lawn in particular was quite large, and by itself it took a full hour to cut. I guess I have the process improvement gene turned on, because I spent a good amount of that one hour trying to figure out how to make it something less than, well, one hour. Eventually I figured out what slowed me down - square corners. Each 90 degree turn meant stopping, turning the mower and starting again. If I could remove as many of those corners as possible, I would reduce the amount of time it took to cut that lawn.

This particular yard wasn't perfectly rectangular, and had several trees. I determined that there were a few places along the edge I could cut first to remove some of the variance in the shape of the yard, and that I would have to do at least one full pass to cleanly cut the outside perimeter (OK, so I did care a bit about the quality as well!). After that, I kept to cutting in one continuous strip that was curved around the corners rather than square. This didn't bother my Dad at all, so I then set about optimizing the new process.

It took a couple of tries, but I eventually reduced the cutting time from a full hour to 45 minutes. Being a rather impatient teenager at the time, having an extra 15 minutes to do what I wanted was much better than nothing!!

This relates to practices in Agile that allow a team to move faster, or at the very least sustain their current velocity. Automating anything that is repetetive, tedious and chews up time goes a long way towards reducing and even eliminating those 90 degree turns. Testing, builds, deployments, etc. are all practices that can be automated and have a tremendous amount of tool support now. These "rounded corners" will keep the team moving ahead at a steady pace.

Oh yeah, after I moved out of my parents' house, my Dad bought a riding mower. Cutting the grass is now considered fun, I'm told. I have never had the opportunity to use the riding mower myself. I'm sure there's another lesson there somewhere! :)
Posted by Dave Rooney on Sunday, June 14, 2009

Email ThisBlogThis!Share to TwitterShare to FacebookShare to Pinterest
Labels: agile

Strangely, I have exactly the same story with my parents yard, even down to dad buying a riding lawnmower after I moved out.

Must be something about geeky Lanark County residents born in 1965. :)

I'm with you, Dave. Just started replacing my poor excuse for a lawn with this seed that needs to be cut at most once a month and never needs watering. If it can't survive on its own, it's not going in my yard. :)