Our 6-year-old Golden Retriever Hannah is pretty typical of that breed. She's big, happy, playful, lovable and thinks she's a lap dog. She and our cat wrestle as if they're littermates, and she's best buddies with our rabbit. A born predator if there ever was one! :) 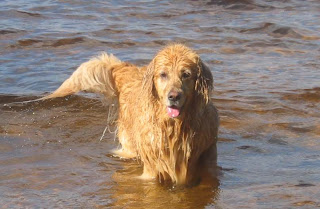 Hannah has also had to have surgery on both her hips because of hip dysplasia, a genetic defect in the formation of the ball and socket joint that leads to severe, painful arthritis. Her first was when she was 11 months old, and the second when she was 3-1/2 years. Both of those were successful, and she recovered to being a normal dog.

Late last February we were walking in a dog-friendly park here in Ottawa, and had taken Hannah's brother (who lived around the corner) with us. The two dogs were running around and as best as we can tell Hannah was bumped from the side while both her back legs were planted in the deep snow. She ended up having a sprained MCL ligament in one leg and ACL in the other. The MCL sprain healed fine, but in early April she completely tore the ACL.

The ACL tear, unfortunately went undiagnosed for quite some time. We had been told it was just a sprain, and to keep her resting. She would improve somewhat, but then would start limping quite a bit. Finally, after taking her to another vet, the complete ACL tear was properly diagnosed. The only way to correct it was surgery.

I do need to point out, though, that the only indication that something was wrong with Hannah was the limping. She never whined, wasn't aggressive at all, and still got excited about the "W" word (that's 'walk' for those of you who don't have dogs!). In my 25+ years of playing basketball, I saw 2 people injure their knees with torn ACL's, and both screamed in pain. One, a man in his late 20's, was literally in tears from the pain. Hannah, however, would still climb stairs and jump up on the bed if we'd let her (and sometimes even when we wouldn't!).

This past Thursday, Hannah went in for corrective surgery for her bad knee. The procedure is known as Tibial Plateau Leveling Osteotomy (TPLO), and the surgeon literally cuts off the top of the tibia bone and repositions it to support the motion of the knee. This is done in place of a graft or synthetic replacement for the ACL ligament, and is generally better tolerated in dogs. Hannah came through the surgery just fine, and we picked her up from the vet about 6 hours after she was finished. She was still pretty groggy, and was understandably not putting any weight on the repaired leg at all. It's going to take 8 weeks for the bone to recover sufficiently for her to begin rehab, which I guess will be her Christmas present.

So now on to the point of this entry. This is a dog who has just had her third major surgery in 6 years. On the first night, she moaned a couple of times, but generally just slept. On Friday she was much more alert, but still not quite herself. On Saturday, she was almost back to being normal in terms of her behaviour, and she was actually putting some weight on the repaired leg. This morning (Sunday), you would think that she hadn't even had the surgery. She putting weight on the leg (which we're trying to dissuade), she's as alert and perky as ever, she was playing with the cat, and was begging for food at the table during breakfast.

I do realize that the medication she's receiving is helping to control the pain quite well, but this is still quite remarkable. When it gets right down to it:


Dogs don't know how to be wimps.

A human in the same situation would be lying in bed or sitting on a chair. They would be moaning and groaning about how sore they are, and how long they're going to have to convalesce. Hannah, meanwhile, seems to be saying, "Hmmm, my leg hurts. Anyway, LET'S PLAY!!".

Perhaps when your lifespan is only 12-15 years, you realize that you don't have any time to waste wallowing in your fate. I think there's a lesson to be learned or some inspiration to be gained from this. While we can't always live like today's our last day alive, maybe we can live like we're only around for 15 years.

Suddenly, the ache in my lower back isn't quite as bad.
Posted by Dave Rooney on Sunday, November 02, 2008

Depends on the dog - I can assure you that my younger dog is good at being a wimp, in particular letting us know when he's just starting to brew up an ear infection, or has a slightly inflamed disk.

this is the first time I came across your blog - thoroughly enjoyed it.

Also, I am in total agreement with you regarding business. It is much harder to get them to change their ways than development team members. I believe that development should not be a fire some requirements at development and expect some mystical software later rather a 'delivery partnership'.

Thanks very much - I appreciate the note.

Regarding the Business/IT partnership, I don't think that IT professionals should be asking the business to change their ways, as such. If we work "with the business in the business", there is a much better likelihood that what results will actually be of value!